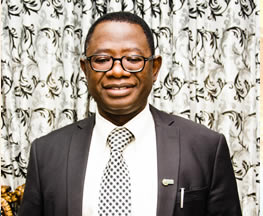 Professor Ayobami Salami was born in Ibadan and attended St. Paul Anglican Primary School, Latunde Village in Oluyole Local Government Area of Oyo State. He was admitted to Lagelu Grammar school in 1977 and completed his Secondary education in the School in 1982. He proceeded to the then University of Ife in 1982 and completed his B.Sc. degree in 1986. He bagged his M.Sc. degree in 1989, and PhD in 1996. He started his career as a Teaching/Research Assistant in Obafemi Awolowo University immediately after his National Service in 1987 and was promoted to the rank of Professor in the Institute of Ecology and Environmental Studies of the University on 1st October, 2003.

He was the Project Manager, the World Bank sponsored Centre of Excellence (CoEx) in Software Engineering: Science & Technology Education at Post-Basic Levels (STEPB) Project OAU, from 2011-2013 and the Centre Leader, World Bank sponsored African Centre of Excellence on ICT-Driven Knowledge Park from 2014 to 2016. He has coordinated many multi-disciplinary projects for several national, regional and international organizations. He was the Program Coordinator (West and Central Africa), for the Swedish International Development Cooperation Agency (Sida)- sponsored International Training Program on Education for Sustainable Development in Higher Education, in 2008; and Consultant to UNEP for the Terminal Evaluation of Project GEF/GFL-2328-2770-4889 on Integrated Ecosystem Management in the Trans-Boundary Areas Between Nigeria and Niger in 2010. He was the Nigerian Principal Investigator for the IDRC multi-country Research Project (N°:105714 – 001) on The Practice of Ethics in Health and Environmental Research in Africa from 2010-2013. He also coordinated the Nigerian capacity building component of the EU-sponsored project on Monitoring of Environment for Security in Africa (MESA) from 2014-2017.

Professor salami has been an Eisenhower Fellow (USA) since 2009. He is happily married to Prof. Mrs. Olusola Salami and they are blessed with children.